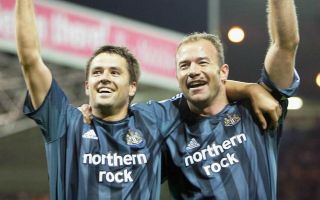 Former Newcastle United striker Michael Owen has explained he thinks Alan Shearer’s hostility towards him dates back to that decisive game that saw the Magpies relegated with a defeat against Aston Villa in 2009.

The two England legends had a very public spat on Twitter this week, with Shearer tweeting that he and others couldn’t wait for Owen to get out of Newcastle when he was at St James’ Park.

Yes Michael, we thought that also, whilst on £120k a week….. @nufc https://t.co/bzzEDdjdN1 pic.twitter.com/I4CdsQcKKr

Not sure you are as loyal to Newcastle as you make out mate. I distinctly remember you being inches away from signing for Liverpool after Sir Bobby Robson put you on the bench. You tried everything to get out. https://t.co/ZQBrlojeEv

Some were surprised to see these two clashing, given that they often seemed to have a strong relationship on the pitch when playing together for both Newcastle and the England national team.

Speaking to the Daily Mirror, Owen now says he believes Shearer holds a grudge against him for not playing in that defeat against Aston Villa that saw NUFC relegated.

“A year after I left Newcastle, I was talking to a mate who is a friend to both of us, and said I should give Alan call about that. He said ‘I wouldn’t if I would you mate’,” he said.

MORE: Video: Liverpool fans will be happy with Alisson injury update from Melwood

“I said: What?!! That’s how I found out. There was nothing, I don’t dislike him. Unless I can’t read people, I had no idea for like a year or two after Newcastle got relegated, that he had a gripe with me.

“I hadn’t any clue, I was like “oh, you are joking’. And then it all came out. I’ve got no problem, with him – it’s just he has an issue with what he thinks I did wrong in that last game of the season against Aston Villa.

“We were big, big mates, we used to play golf every week, strikers v keepers at Newcastle, me and Shearer v Harper and Given. We would fly off to Loch Lomond occasionally, really good courses.

“If Alan Shearer has come to the conclusion that I didn’t fancy playing in the last game against Aston Villa because I was worried about getting injured and worried about my next move then that’s fine in a way.

“I find it hard that he’s come to the decision to blame me. I was hardly fit in the period he took over, and then I actually put my body on the line in the last game when really I was a week or two away from being fit from a groin injury.