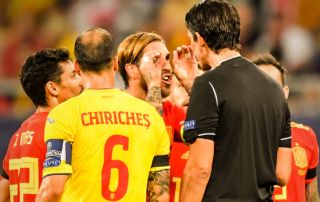 Real Madrid captain Sergio Ramos was his usual self in action for Spain in Thursday night’s game against Romania.

See the image below from Bleacher Report as Ramos can be seen goading the referee right to his face after he received a yellow card for the way he celebrated his goal.

This is how Sergio Ramos reacted after receiving a yellow card for his goal celebration ?

The 33-year-old clearly seems to be telling the ref right to his face that he needs glasses, which certainly sounds like the kind of thing he’d do.

We’re not quite sure how Ramos managed to stay on the pitch with such a deliberate dig at the match official, but there we go.