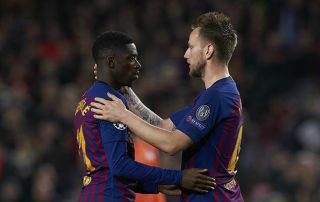 Barcelona were locked in reported talks with Paris Saint-Germain over a deal for Neymar this summer, but an agreement was never reached.

As noted by Goal.com, the Catalan giants saw their efforts of securing a reunion fall short as despite looking to include Ousmane Dembele in the deal, he wasn’t interested in a switch to France.

The reasons behind that decision have now reportedly come to light, with Calciomercato noting, via the paper edition of L’Equipe on Thursday, that there were two major reasons behind why Dembele wasn’t keen on a move to join the reigning Ligue 1 champions.

It’s noted that he had no interest in leaving Barcelona and wanted to stay, and he believes that he could have a better chance of winning the Ballon d’Or if he stays at the Nou Camp.

If accurate, those are some ambitious reasons but he can’t be faulted for setting his sights high, and Barcelona will certainly be hoping that he produces the type of form that helps both Dembele and the club to impress and achieve their objectives.

It remains to be seen whether or not the situation changes and if the La Liga giants opt to try again for Neymar next year, but based on the latest reports, it doesn’t seem as though Dembele has any desire to be included in such talks between the two clubs.

Dembele, 22, has been with Barcelona since 2017 after his move from Borussia Dortmund, and he’s gone on to score 18 goals and provide 17 assists in 66 appearances.

Injuries have been a problem though, as they blighted his first season in Spain and it’s the reason why he is currently out of action for coach Ernesto Valverde’s side.

Barcelona star ruled out for up to three months of action after sustaining knee injury at Euro 2020 June 21, 2021 19:20
FC Barcelona