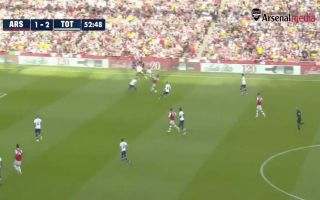 Arsenal winger Nicolas Pepe showed off his outstanding dribbling skills in one dazzling moment against Tottenham on Sunday.

The Gunners were held to a 2-2 draw against their local rivals at Emirates Stadium last weekend, after falling behind to an early Christian Eriksen goal and a Harry Kane penalty.

Alexandre Lacazette halved the deficit right on half-time before Pierre-Emerick Aubameyang equalised in the 71st minute, but the home side were left rueing missed opportunities after an impressive performance in the second period.

Nicolas Pepe formed one-third of an all-star attacking triumvirate alongside Lacazette and Aubameyang, with the £72 million (fee confirmed by Sky Sports) man producing another lively display upfront which suggests there is a lot more to come from him.

Arsenal’s record signing humiliated Eriksen with an incredible turn in the second half, before racing away to try an create another opening in the final third.

I need another angle of this skill from Pépé please, @Arsenal ?pic.twitter.com/caTe8brPp0