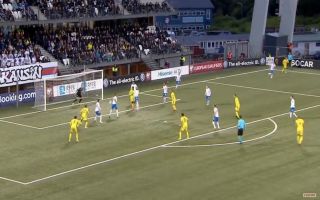 Manchester United’s Victor Lindelof showed off great predatory instincts in the box to score a rare goal for Sweden on Thursday night.

Sweden are currently 4-0 up away against the Faroe Island in a Euro 2020 qualifier, as they aim to close the gap on Group F leaders Spain.

Lindelof, who has been a regular in Man United’s starting XI for quite some time now, has only managed to score two goals in 29 outings for his country, but he has added to that tally with a superb effort this evening.

The Red Devils defender saw a pinpoint cross into the box miss narrowly miss his teammates, but he watched it all the way before firing in a superb first-time volley past the helpless opposition goalkeeper.

Get tickets to any Euro 2020 Match for low prices link in bio! pic.twitter.com/bKF8AWaHi7