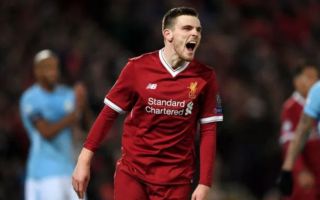 The more games that Andy Robertson plays for Scotland you start to wonder to what extent do his Liverpool teammates make him look much better than he is? He was poor again tonight and he might soon come under pressure from another fantastic left-back who now plays in the Premier League.

Robertson was at fault for the equaliser in tonight’s 2-1 defeat at home to Russia and looked generally shaky throughout. He’s obviously going to struggle a bit as he’s playing in a much more inferior team than he’s used to, but he certainly doesn’t come across as an elite, Champions League winning caliber of player.

Countless times tonight he took a poor touch, hit a cross that went nowhere near a teammate and looked vulnerable defensively.

At Liverpool he has one of the world’s best centre-backs next to him and plays in a dominant team who play on the front foot. Any mistakes he makes are covered by his teammates and he doesn’t’ have to defend as often.

His poor Scotland form hasn’t gone unnoticed by these fans on Twitter either:

Gets away with much more at Liverpool because he’s covered at the back. For Scotland, I’ve said it before, positional awareness just isn’t good enough.

@BBCSportsound Time Andy Robertson performances are looked at. I can’t remember one he was amazing. Yes scored a belter a game back but his defensive display tonight joke oh never a captain in my book.

Has Andy Robertson ever had a good game for Scotland? One of the most overrated defenders on the planet

Andy Robertson is a Charlatan. The same Darren Fletcher was with Scotland. It’s easy to play football with world class players around you.

Andy Robertson would have struggled to get into the Queens Park XI tonight, never mind a World XI.

Andy Robertson is a fucking fraud. Supposed best player in the country and captain yet never a leader in a million years. Should be the standout in this team but makes more mistakes than most

If this form continues and Kieran Tierney has a good start for Arsenal then Steve Clark will have a genuine decision to make. Robertson looks like he doesn’t know what positions to take up defensively and was badly exposed against a pretty average Russian side.

It just goes to show that some players can be made to look outstanding because of the team they play in. Good players will play well when surrounded by great players, but a truly top player will elevate the performances of those around them. It looks like Robertson may fall into the first bracket.