Manchester United defender Chris Smalling has expressed a desire to stay in Italy beyond his year-long loan deal at Roma.

As per Sky Sports, the 29-year-old moved to Stadio Olimpico from Old Trafford on August 30 until June 2020, after falling down the pecking order in Ole Gunnar Solskjaer’s squad.

The Red Devils signed Harry Maguire from Leicester City for a world record fee earlier this summer, which left Smalling facing a season on the fringes of the action at the Theatre of Dreams.

The English centre-back was allowed to complete a switch to Serie A so that he can start playing regularly once again, but Roma do not have the option to sign him permanently at the end of the loan agreement.

At his official unveiling at Stadio Olimpico on Friday, Smalling revealed that he can see his long-term future in Italy if all goes well at Roma over the next 11 months. 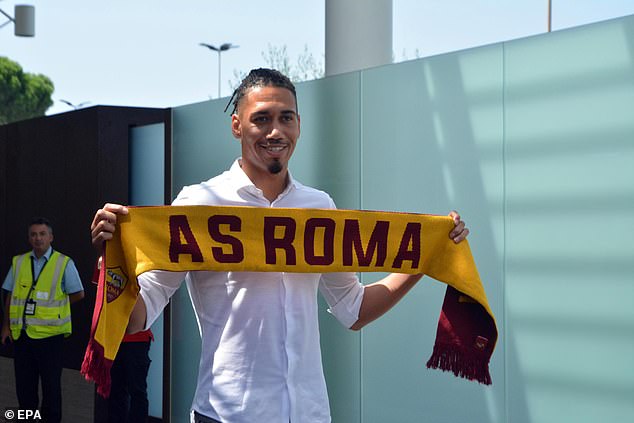 Smalling posing with a Roma scarf

As per Sky Sports, the United ace told a press conference: “This is an opportunity that came to me that I was very interested in, and I was very eager to come,” he said.

“It happened very quickly and now I focus on the next game, getting up to speed with training in terms of the manager’s methods and then hopefully have a very good season.

“To be able to have the chance at a big club, and then if it prolongs and the club is happy then I can definitely see a longer-term future in Italy.”

Smalling was left on the bench for Roma’s latest outing against Lazio on Sunday, having only just settled into his new surroundings in Italy.

The former Fulham defender has 323 appearances across all competitions to his name for the Red Devils to date and that experience will hold him in good stead as he undertakes a new challenge in Serie A.

As per Sky Sports, Smalling went on to insist that he has always wanted to experience playing abroad, adding: “I’ve always had a desire deep down to experience this and have an opportunity to come to a big club who has got big aspirations.

“I don’t want to live my life with regrets and to be able to experience this and build on this journey, it’s something I’m really looking forward to.

“I’d heard many great things about Italy and Rome itself and is an experience that I’ll definitely savour.”