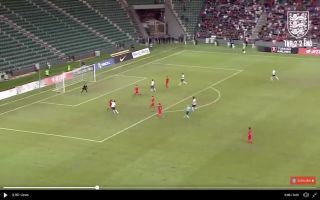 Arsenal sensation Reiss Nelson rescued England’s Under-21s this evening with a superb goal to complete a comeback for the Young Lions, check it out below.

In the 75th minute of tonight’s Under-21s European Championships qualifier, Nelson was played in on goal by one of his teammates and the tricky winger showcased his trademark silky footwork before firing a shot on goal.

The goalkeeper must have been caught by surprise as he failed to keep out the effort that was fired directly at him.

Check out Nelson’s goal below:

Reiss Nelson’s goal to make it 3-2 to the England u21s against Turkey #AFCpic.twitter.com/XhbH3WmJAv

What a great day for Arsenal’s academy.