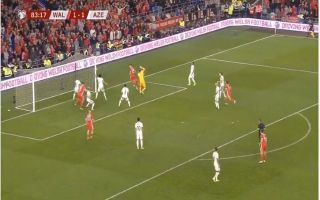 We are yet to be graced with VAR in the European Championships qualifiers but there could be a good case for it here. Gareth Bale has rescued Wales yet again with a later winner.

His leap is pretty incredible to head the ball in the first place and despite a frantic defensive clearance, the linesman ruled the ball did cross the line. He was also involved in the first goal as his effort forced a hilarious own goal.

READ MORE: Video: Horror own-goal after Bale’s shot is deflected to give Wales the lead

It is close, but it looks like the whole ball does cross the line so Wales could be set for a crucial win.

Incredibly this strike is his 32nd in a Wales shirt.