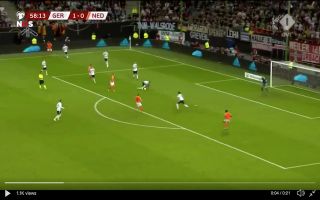 Barcelona star Frenkie de Jong has drawn Holland level against Germany with a classy goal, the midfielder showed off a lovely touch before hitting the back of the net.

22-year-old midfielder maestro Frenkie de Jong has showed fans that he has an eye for the back of the net as well, by scoring a well-taken goal for Holland against Germany.

In the 59th minute of this evening’s European Championships qualifier, former Premier League ace Ryan Babel showcased some lovely footwork before aiming a cross into the box.

De Jong made a brilliant run from the edge of the box before using a classy touch to take the ball past Germany defender Nico Schulz, before calmly slotting the ball into the back of the net.

Check out the midfielder’s equaliser below:

This strike will give De Jong a massive confidence boost as he looks to get his Barcelona career off to a flying star.

The former Ajax sensation will be hoping to challenge for the Champions League trophy with the Blaugrana this season.