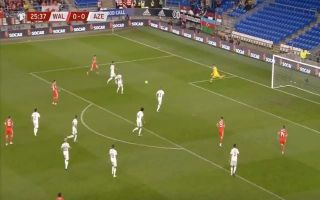 There’s something bizarrely enjoyable about watching a professional player do something so utterly awful that it would be inconceivable even at Sunday league level.

This own-goal that gives Wales the lead over Azerbaijan is hugely unlucky but it’s also something that will give the manager nightmares.

If you want to be especially generous you can give Gareth Bale an assist, but i don’t think this is how he envisaged this:

That is a gift for Wales! ?

It’s a disaster for Pashayev as Bale’s deflected shot accidentally hits him on the head and bounces into the net!

Watch live on @SkySportsPL or follow it here: https://t.co/zPnMFafEL7 pic.twitter.com/WEvaHEsocb

Brilliant own goal in the Wales vs Azerbaijan game pic.twitter.com/DbzjkOFeH7

If you ever need an example of it’s better to be lucky than good, then that’s it.