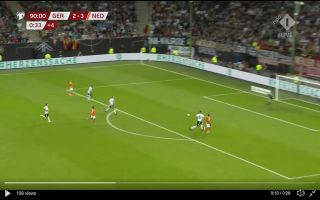 Liverpool midfielder Gini Wijnaldum produced a brilliant finish to seal a emphatic victory for Holland against European rivals Holland. Check it out below.

Energetic midfielder Georginio Wijnaldum sealed an impressive performance for Holland against Germany tonight, the Liverpool star put the ball into the back of the net after a frightening counter-attack.

In the 90th minute of the clash Holland launched a counter-attack and former Manchester United attacker Memphis Depay picked out Wijnaldum’s lung-busting run with a superb pass.

Wijnaldum managed to stay composed as he charged forward and slotted the ball into the goal with a superb side-foot finish.

Take a look at Wijnaldum’s lovely finish below:

Wijnaldum was phenomenal for Ronald Koeman’s side this evening, the 28-year-old also provided the assist for Donyell Malen’s goal to put his country into the lead just 10 minutes earlier.

Liverpool fans would no doubt love to see these kind of runs from the fan favourite this season.