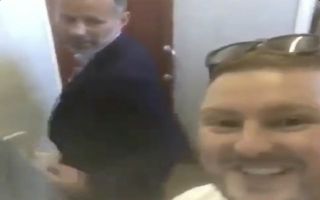 A video of Wales boss Ryan Giggs telling off a supporter who tried to film him in the men’s toilets has resurfaced on social media this week.

The Manchester United legend was harassed by a fan while urinating last year, with the man in question seen shouting his name and laughing before the Wales boss took action.

Giggs responded to the supporter by insisting that he put down his phone, but the video still ended up online despite being cut off prematurely.

The former Red Devils winger’s angry reaction has been doing the rounds on social media once again on Friday, ahead of Wales’ Euro 2020 qualifier against Azerbaijan this evening.

When you meet Ryan Giggs in the toilet.