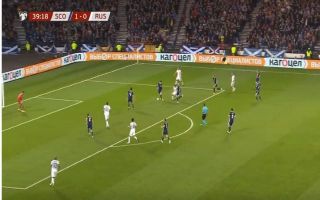 It’s obvious that playing in a poorer side will have a negative impact on a player, but there’s a huge difference in terms of performance from Andy Robertson playing for Scotland compared to his Liverpool form.

This goal isn’t entirely his fault but he gets himself into a horrible position and “tackles” the ball towards the centre of his own box and it allowed Dzyuba to bring Russia level:

Andy Robertson with the assist for Dzyuba. You love to see it. ? #SCORUS pic.twitter.com/e10gftSYes

Robertson has looked shaky in possession and has gifted the ball to Russia a couple of times now. Scotland need the Liverpool man to step up and play better in the second half.

It could also be an indication that Liverpool’s system gets the best out of Robertson and perhaps Kieran Tierney might be a better choice for the national team.