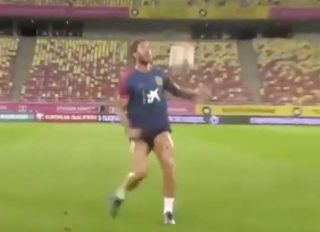 Sergio Ramos is known for his world-class defending, but the Real Madrid and Spain stalwart showed he can pull off a trick or two with the ball as well.

The 33-year-old scored from the penalty spot in a 2-1 win over Romania in Spain’s Euro 2020 qualifier on Thursday night.

That win ensured that Spain remain top of Group F having won all five of their qualifying games thus far, and so it was a positive night for all concerned as they boast a five-point lead over second-placed Sweden and look set to secure their place in next year’s tournament.

As seen in the video below though, some of the Spanish players were certainly enjoying themselves in training prior to the game, as they decided that they would pull out some of their best bits of skill.

Ramos got involved too and showed some excellent control and first touch quality to flick the ball up with a back heeled effort twice. Clearly there is plenty of class to go with the no-nonsense defending as we’ve seen him show superb composure and quality on the pitch on countless occasions.

Thiago Alcântara wasn't the only one showing off his skills during Spain training ? pic.twitter.com/jK5axksLrI