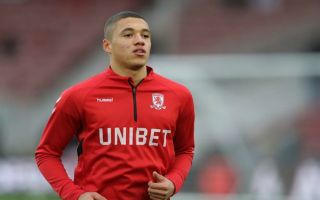 The teenager has quickly risen through the ranks of the Boro’s youth setup, joining the reserve team last summer. He went on to make 24 appearances last season, three of which came in the League Cup. This year, the 17-year-old has made 3 appearances  for Middlesbrough’s reserve team while starting in their League Cup match against Crewe Alexandra which saw the Boro lose on penalties.

Wood has also featured in England’s youth teams and currently plays for the U17s, making 10 appearances for them.

According to the Sun, Arsenal, Tottenham and Burnley are tracking the defender but Burnley are the front-runners for his signature.

It’s only a matter of time before Wood breaks into Middlesbrough’s first team and a few years with the Boro could help him mature. A move to the Premier League this early may not give him much playing time in the senior teams.

Hence, it would be good for the 17-year-old to stay at Riverside Stadium.