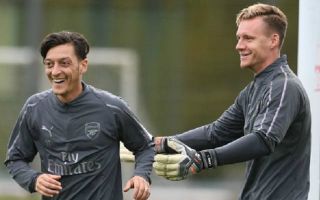 Former Tottenham striker Darren Bent feels that Arsenal goalie Bernd Leno is among the best shot-stoppers in the Premier League.

The German custodian has made 40 appearances for the Gunners since joining them from Bayer Leverkusen last summer, keeping a total of 10 clean sheets so far. This season, Leno has done well under Unai Emery, making some fine saves as of now.

Arsenal are not in the best of situations when it comes to defence but have a pretty reliable goalkeeper in the German international.

Bent feels that the 27-year-old is among the best keepers in the Premier League. Speaking to Football Insider, the former England international said: “I think he’s developing well, I thought he was a good goalkeeper anyway but he’s turned into one of the best in the league at the minute. He’s really consistent. He’s good with his feet and is perfect for the way Arsenal want to play. They make me a bit nervous when they try to play out from the back but other than that they’re pretty good.”

Leno is certainly among the best in the league. He may not have kept as many clean sheets as the likes of Alisson and Ederson but that’s mostly due to Arsenal’s shaky defence. A lot will be expected from the German international if the Gunners are to finish in the top 4 of the Premier League. They are solid in attack but not so much at the back. However, the club can always count on Leno to keep the opposition attackers out.

Arsenal are currently 5th in the Premier League, amassing 7 points from their first four matches. Emery’s side next play Watford at Vicarage Road on the 15th before opening their Europa League campaign against Eintracht Frankfurt.