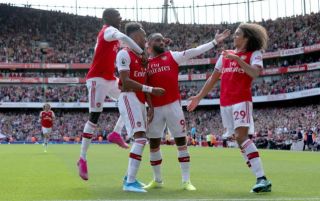 It depends how much importance you place in these kind of things whether you will be outraged or nonplussed at the release of the FIFpro World XI strikers shortlist.

The shortlist was reported by BT Sport on Twitter and it shows that Arsenal star Pierre Emerick Aubameyang has been left out despite scoring more goals than 11 of the 15 nominees:

Of course every player on that list is phenomenal but you could make a real case for the Arsenal striker to be included over Karim Benzema or Son.

It’s entirely possible that he’s being penalised for playing for an Arsenal team that didn’t really achieve anything last season. Perhaps if he had been a match winner in the Europa League final then that could have been enough to see him nominated.

Son only scored 12 league goals last season but it could be his Champions League heroics that saw him nominated. You could also be cynical and say this is the organisers trying to appeal to the Asian market.

Either way it’s an honour that’s nice to have, it shouldn’t have too much impact on him. Depending on his character it could even fire him up to ensure that he does get a nomination next year.