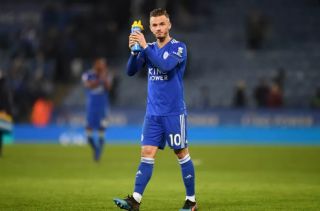 Ex-Leicester City defender Steve Walsh has poured cold water over speculation of a move to Man Utd for James Maddison in the near future.

As noted by The Sun last month, it has been suggested that the Red Devils could launch a move for the talented playmaker in January to bolster Ole Gunnar Solskjaer’s options in the final third.

The 22-year-old has bagged eight goals and nine assists in 43 appearances since joining the Foxes, proving that he can produce in the Premier League at the highest level.

With plenty of room for improvement and having yet fulfilled his full potential, the future certainly looks bright having also got the nod from Gareth Southgate in the England squad this week too.

However, Walsh has rubbished talk of a departure from Leicester at this early stage, as he believes that Maddison is happy where he is and doesn’t expect him to leave the King Power Stadium any time soon.

“He’s happy where he is, that’s number one,” he told The Express. “And I think he’s grateful that Leicester gave him a chance in the Premier League because he was playing for Norwich and, OK, doing very well, but it’s a big step up.

“We spent some good money (£20million) on him and are now developing him into a top-class player. I think he understands the grass isn’t always greener on the other side and I’m sure he’s a loyal kind of guy, he seems it.

“He’s down to earth and a great lad. He’s got everything to make him one of the top players in the world if he continues with the progress he is making.”

Time will tell whether or not Man Utd look to test the resolve of Leicester with regards to Maddison though, as ultimately as seen with Harry Maguire this past summer, if a significant offer is made and perhaps is deemed too good to turn down, then the Foxes could be open to a deal.

Nevertheless, Walsh is spot on with his assessment and Maddison could yet prefer to remain where he is to continue his development with a prominent role under Brendan Rodgers as Leicester continue to impress.