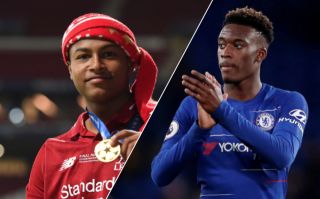 Hudson-Odoi has been out injured for some time now, with the teenager’s last professional appearances coming against Burnley in the Premier League back in April.

However now, it seems like the Blues wonder-kid is edging ever closer to sealing a return from this injury, after he posted a video of him doing some kick-ups in Chelsea training earlier this week.

In response to this video, fellow Chelsea ace Trevoh Chalobah urged Hudson-Odoi to ‘sign it’, which relates to the fact that the 18-year-old is yet to pen a new deal with the Blues despite a report from the Guardian, which dates back to July, that states the England international was set to do so.

And amid this, Brewster has taken the chance to urge Hudson-Odoi to join him at Anfield, as the Reds youngster replied to Chalobah’s tweet with ‘at Liverpool’, implying that he wants the forward’s next contract to be with Jurgen Klopp’s side.

And following this cheeky tweet from Brewster, Liverpool fans have flocked to Twitter to label the forward as ‘agent Rhian’ for his attempts to try and get Hudson-Odoi to sign with the Reds.

You can’t blame him for trying!