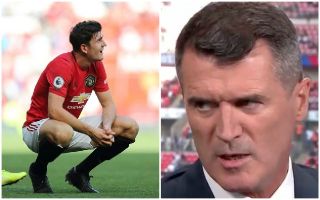 Manchester United legend Roy Keane has revealed his ‘worry’ over Harry Maguire’s defensive ability, the Irishman went on to say that the star has enjoyed an ‘ok’ start to life at United.

The ex-United midfielder also believes that Maguire has experienced an ‘ok’ start to life at Old Trafford.

Ole Gunnar Solskjaer’s side have endured a difficult start to the new Premier League campaign, despite winning their opening day clash against rivals Chelsea 4-0.

Keane gave his thoughts on Maguire’s start with United ahead of England’s European qualifier against Bulgaria earlier this evening.

Maguire was made the world’s most expensive defender when his move to United was confirmed, according to BBC Sport the Red Devils parted with £80m to sign the centre-back from Leicester.

Maguire joined the Red Devils in a deal that makes him the world’s most expensive defender.

Here’s what the Irishman had to say on the defender:

“We’re talking about how good he is on the ball but defensively I still have one or two question marks over him. I worry about his pace on the turn.”

“I remember the first goal against Crystal Palace and he wasn’t doing his best covering his other centre-half. Listen, he’s 26 years of age now. You’re worried if you’re pointing these things out to him.”

Keane’s assessment of Maguire seems slightly harsh, United’s defence hasn’t looked like it’s anywhere near the level of their top six rivals – but summer signings Maguire and Aaron Wan-Bissaka have fared well for the Red Devils.

All eyes will be on Maguire for United’s next league game, the stalwart will have to inspire his current side to a much-needed victory against former club Leicester.