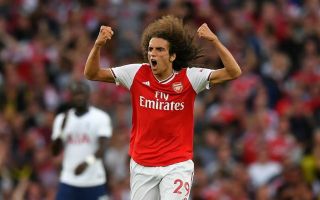 Arsenal midfielder Matteo Guendouzi expressed his delight on being called up to the France national team for the very first time.

The 20-year-old midfielder has been in terrific form for the Gunners this season and has been rewarded with what is a lucky call-up to Didier Deschamps’ squad. Guendouzi wasn’t initially in the team but was included later after Paul Pogba withdrew due to an injury he sustained in Manchester United’s match against Southampton.

The Gunners star said that it’s a dream come true for him to be in the senior national team. Speaking to ESPN FC, Guendouzi said: “It was always a dream to be called up one day for the national team. I have played in all the youth teams since I was 16-years-old. I have worked so hard to get here, with the France A team. It is maybe a bit of surprise that he has arrived so quickly but I knew that if I was performing with Arsenal, one of the biggest clubs in Europe, then I would have a chance. My chance is now and I want to take it.”

Guendouzi deserves his maiden international call-up and will be hoping to make his debut in any of France’s Euro qualifiers against Albania and Andorra. The world champions’ group currently has them, Turkey and Albania with 9 points with Les Bleus in first place due to goal-difference.

Provided Guendouzi keeps performing well for Arsenal, he could well find a place in France’s squad in Euro 2020.