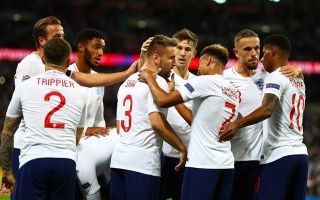 England fans took to Twitter to hammer Man United forward Marcus Rashford following his first half display against Bulgaria at Wembley this afternoon.

Gareth Southgate’s side went into today’s match with a 100% record in Euro 2020 qualifying thus far, with the Three Lions now just 45 minutes from keeping up this record following their first half performance vs Bulgaria.

England went into the break with a 1-0 lead after Harry Kane opened the scoring in the match midway through the first half, a goal which came via some fine high-pressing from the home side.

Despite this, England still haven’t been at their best, with a number of Three Lions stars putting in below-par to average performances during the first 45 minutes at Wembley.

One of these players has been Rashford, who was far from world class during the first period this evening, something that has lead to a number of fans slating him on Twitter.

During, and following, the first half, a number of England supporters made their feelings towards Rashford and his first half display known on Twitter, with some even branding the forward as “useless”.

Another match and Marcus Rashford is more useless than ever.

Rashford is useless man get on Sancho already

Get Rashford off man.. utterly useless unless he's playing SS

Rashford is so poor.. And people compared him to Mbappé ?

Rashford looks very weak and poor in this game

Rashford is so poor man

How rashford gets in the England team is a joke. Terrible player