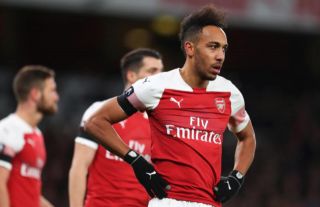 Pierre-Emerick Aubameyang has seemingly made his thoughts on teammate Granit Xhaka known, after the Arsenal star liked a post on Instagram that urged the club to sell the Swiss international.

Xhaka didn’t have the best of games for the Gunners last weekend, as he conceded a penalty and put in a poor performance overall for the north London side during their clash against rivals Spurs.

And it’s this performance that has seen some calling for the club to get rid of the midfielder, with one of these being AFTV’s Troopz.

As seen in the video above, the celebrity Gunners fan can be heard calling for the club to sell Xhaka in the January transfer window, with the picture below showing that Aubameyang has liked the post.

Aubameyang liking a IG post calling for Xhaka to be sold. However, his name is not Paul Pogba so no one will say a word. pic.twitter.com/MFSSHuZ6ck

Is this a sign that the Gunners forward wants to see the club sell Xhaka in the next transfer window? It certainly seems like it…