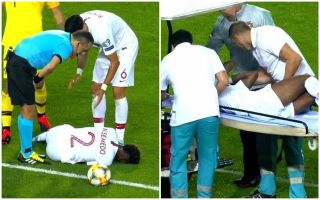 Barcelona have been hit with a major setback as starting right-back Nelson Semedo has been stretchered off for Portugal in their Euros qualifier vs Serbia.

In the 65th minute of Portugal’s European Championships qualifier against Serbia this evening, Barcelona star Nelson Semedo was stretchered off with an apparent knee injury.

Considering that Semedo couldn’t leave the field himself, this suggests that the injury could be quite serious.

Semedo looked in extreme pain once he went down:

Semedo had to be substituted in the 65th minute vs Serbia in what appears to be a serious injury.

??Nelson Semedo has been stretchered off after a play during Serbia-Portugal. pic.twitter.com/FOaT8Znll7

Ernesto Valverde now has a problem on his hands. With Semedo sidelined, Barcelona academy graduate and Spain international Sergi Roberto will be expected to start for the side.

The other option would be handing academy star Molla Wague the chance to shine in the first-team.