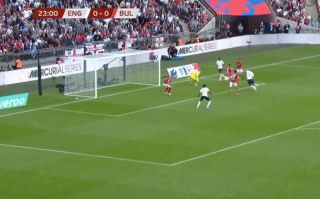 Harry Kane was on hand to give England a 1-0 lead vs Bulgaria this afternoon, a goal which came following some fine pressing from the Three Lions.

After being awarded a goal-kick, Bulgaria attempted to pass it out from the back, however Raheem Sterling was on hand to steal the ball away from one of their defenders following a poor pass from their goalkeeper.

GOAL!@England take advantage of some hapless defending by Bulgaria and @HKane smashes the ball home ???????? pic.twitter.com/dYNVIzQY9J

The Man City forward then laid the ball on a plate for Kane, who slotted home to score his 23rd international goal for Gareth Southgate’s side.

The Bulgarian ‘keeper won’t want to watch that one again!