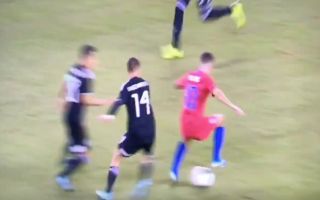 Chelsea winger Christian Pulisic showed why some rate him as one of the world’s most exciting, young wingers around last night, after the Blues ace beat two Mexico players with just one simple skill during the USA’s friendly match.

Pulisic’s side lost 3-0 to their local rivals last night in what was an embarrassing defeat for the US, however despite the result, Pulisic still managed to embarrass a few Mexico players.

Christian Pulisic doing everything he can.pic.twitter.com/sOCj5ctWEp

As seen above, the new Chelsea man beat two Mexico players with just one skill, as he helped his side set up a decent chance to open their account for the night.

Although his side did end up losing, Pulisic can still take from solace from the fact that he managed to ruin a few Mexico players during the match!