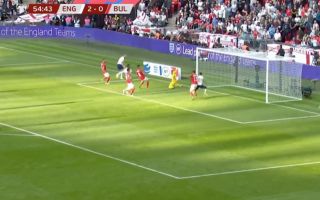 Raheem Sterling added to his England account this evening, after the Three Lions made Bulgaria pay for yet another mistake.

Having already gifted the home side a 1-0 lead in the first half after an error from their goalkeeper, Bulgaria soon found themselves doing the same thing in the second half just minutes after conceding a penalty.

Great work from the front three as @HKane links up with @Sterling7 who puts the ball away#ITVFootball pic.twitter.com/T6AbNx9eDh

Bulgaria were caught trying to play the ball out from the back into midfield, with England then capitalising on this mistake, as Kane squared the ball to Sterling, who tapped home from all of three yards.