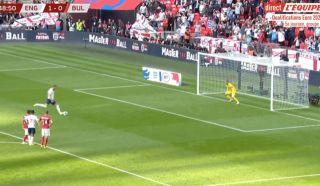 Harry Kane scored again for England this evening, as the Spurs forward kept his cool to score a fine penalty to put the Three Lions 2-0 up vs Bulgaria.

Having already been 1-0 up thanks to a goal from Kane during the first half, Southgate’s side soon made it 2-0 in the second half, after Kane bagged his second of the match from 12 yards.

Calm as you like from the spot. Nicely done, @HKane ?pic.twitter.com/66OVdOajqU

The penalty was awarded after Marcus Rashford was fouled following a neat turn in the box, with Kane then stepping up the spot-kick, as he placed it into the top corner with ease.

England well on their way to maintaining their 100% Euro 2020 qualifying record!