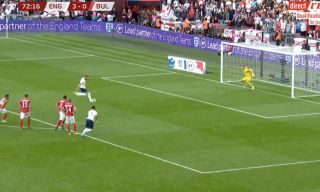 Harry Kane bagged his second-ever hat-trick for England this evening, as he scored yet another penalty to hand the Three Lions a 4-0 lead against Bulgaria.

Having scored once in the first half, Kane added his second of the game earlier in the second half from the penalty spot, with the Spurs forward then adding another to his personal tally around 18 minutes from time after he scored yet again from 12-yards.

After being fouled just moments earlier, Kane picked himself up, dusted himself off and buried his penalty into the top corner to score his first England hat-trick since his treble against Panama at the World Cup last summer.