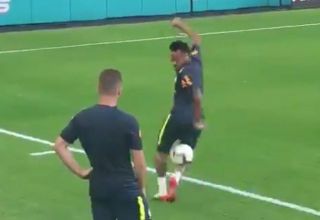 Neymar was back in action for Brazil this week but he was already busy putting on a show ahead of their clash with Colombia on Friday.

Tite’s men secured a 2-2 draw in their friendly encounter with Colombia, as Neymar and Casemiro got on the scoresheet to cancel out a double from Luis Muriel.

It was a productive run out for all concerned, and Neymar will have been delighted to make his return to the pitch, with injury ruling him out of the Copa America this past summer.

It seems as though he’s never been away in some regards though, as he decided to put on a little show for the cameras prior to the game, as seen in the video below.

While Neymar gets criticism for the theatrics that he often brings to the pitch, there is no doubting the ability that the world-class Paris Saint-Germain forward possesses, and this casual showcasing of his skillset just goes to show that he’s great to watch with a ball at his feet and be welcomed back with open arms by many after his injury nightmare.