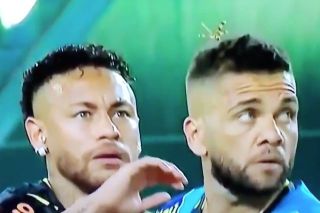 Neymar had Dani Alves’ back on Friday as the pair warmed up for Brazil’s clash with Colombia in an international friendly.

As seen in the video below, a giant insect decided to rest itself atop Alves’ head, and Neymar swooped in to rescue his compatriot and former club teammate.

That led to a priceless reaction from the pair as Neymar managed to flick it away and avoid Alves suffering an unwanted headache, as they looked about as relieved as each other that the drama was over.

Neymar may be known for his theatrics on the pitch at times, but the Paris Saint-Germain superstar stepped up to the plate and delivered this time round…

This video of Neymar saving Dani Alves from a sting is the funniest video you'll see today.

Look at their reaction when Neymar flicks it off. ? pic.twitter.com/2TB1xrwcyn