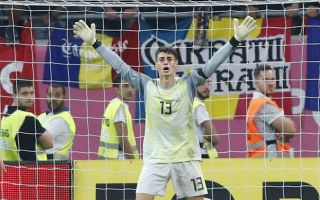 Chelsea goalkeeper Kepa made a stunning save in Spain’s Euro 2020 qualifier against Romania which has led many fans to praise him.

The three-time European champions maintained their 1005 record in qualifying by beating Romania 2-1 in Bucharest. Spain opened the scoring in the 29th minute thanks to Sergio Ramos’ penalty before Paco Alcacer doubled their lead.

Romania pulled one back in the second half thanks to Florin Andone. They had a very good chance to equaliser when Ianis Hagi delivered which was headed by George Puscas only for Kepa to block the Reading striker’s shot.

Many fans have taken to Twitter to laud the Chelsea custodian’s terrific save.

This was a massive save to save #Spain

“Incredible” he barely had to move ??

Waoo… We are in save hands?

Kepa’s performances for Chelsea have been pretty good so far and he’ll be expected to make many more saves as the season progresses. Provides the Spaniard keeps on performing this way, there’s a good chance De Gea will be on the bench during the Euros.