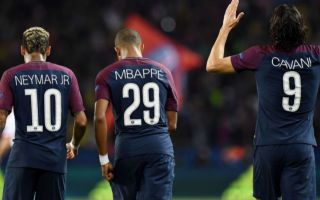 Real Madrid have been handed a bit of bad news today, after it was reported that key PSG man Edinson Cavani is expected to be fit for his side’s Champions League clash against Los Blancos.

Real take on Thomas Tuchel’s side in the competition during the week after next, with the two clubs set to battle it out in the race to finish top of their group and get a favourable draw for the knockout stages.

And ahead of this clash, it seems like Cavani is going to make a timely return from injury, news that won’t go down well with Zinedine Zidane and Co.

According to AS, it was believed that Cavani would be made to sit out his side’s match vs Real due to injury, however now, the Uruguayan is expected to be fit to compete against the 13-time European champions.

Given how good Cavani is, Real will be hoping that the player isn’t declared fit to play against them in ten days time, however given this report, it seems like the 32-year-old will regain his fitness in time to play in the match.

AS’ report also notes that both Mbappe and Neymar have been ruled out of the match due to injury and suspension respectively, so at least Real won’t have to deal with those two in their CL opener.

Real put in shambolic performance in the Champions League last year, as the Spanish giants were knocked out by Ajax in the round of 16 by an aggregate score of 5-3.

Zidane’s side will definitely be looking to avoid a repeat of last year’s display in the competition this season, and a win against PSG in a week-and-a-half’s time will go a long way to helping Real do this.