England enjoyed a comfortable 4-0 win over Bulgaria on Saturday, but Gareth Southgate will surely still be aware he could improve a couple of things.

Harry Kane’s clinical performance masked some flaws in this England side, and there seems little doubt Southgate could be bolder and go for a more attack-minded line up for the Tuesday night game against Kosovo at St Mary’s.

Manchester United forward Marcus Rashford could be the first name out of the starting XI, with the 21-year-old not having his best game after a generally poor start to the season at club level as well.

Fans certainly noticed Rashford struggling for the Three Lions, so there’s surely got to be a place for Borussia Dortmund sensation Jadon Sancho – one of the most exciting young players in world football right now and someone who looks to have considerably more to his game than Rashford.

Elsewhere, Jordan Henderson as usual struggled to look the same player he is for Liverpool after putting on an England shirt, and it seems overly cautious to play him as well as Declan Rice in the middle of the park against opponents of this quality. 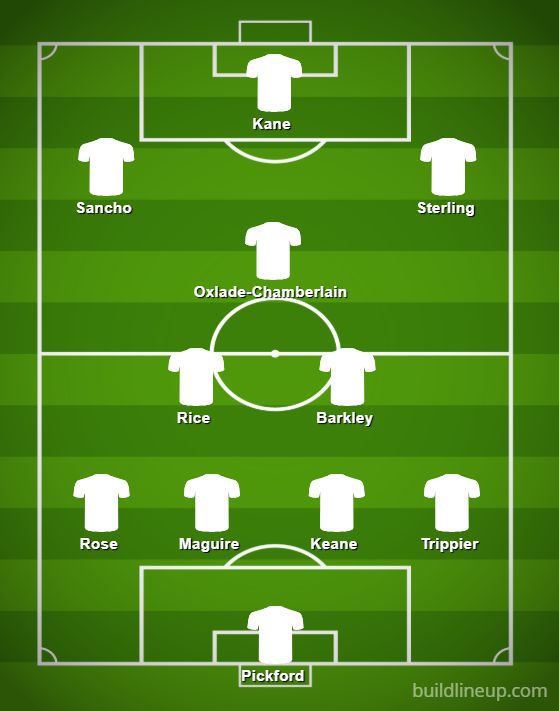 As you can see in the line up graphic above, we’ve gone for his Liverpool team-mate Alex Oxlade-Chamberlain instead, with this Reds ace someone who actually tends to step up when it comes to playing for his country.

Sancho and Oxlade-Chamberlain should add something different and give England a bit more spark, though there could also be room for the likes of Mason Mount and James Maddison in that area.

Either way, time to mix things up a bit more Gareth!