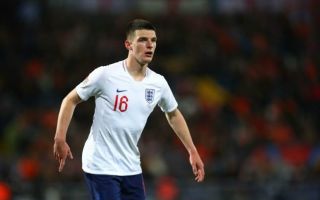 Former West Ham and England striker Ian Wright has picked up on a moment during the national team’s latest game that shows where Declan Rice needs to improve.

The pundit may be being a tad harsh on a talented young player who’s still relatively new to playing regularly at such a high level, but it’s clear he will probably need to tighten up in a few key areas if he is to keep his place in Gareth Southgate’s side.

There’ll be plenty of competition in this England squad, and Rice won’t be guaranteed to keep his place against some quality players if he cannot improve on some elements of his passing, as Wright has pointed out.

Speaking on ITV’s coverage of England’s win over Bulgaria, as quoted by Hammers News, Wright pointed out one moment in which Rice failed to spot a run made by Raheem Sterling.

“This is really frustrating for me,” he said.

“Look at how frustrated he is. He’s getting that pass [at Manchester City] and Gareth’s got to be saying to Declan ‘if Raheem makes that run, he’s got to get it’.

The 20-year-old has been a superb performer for West Ham, but it may still be that adjusting his game to playing alongside world class stars like Sterling is proving a challenge.