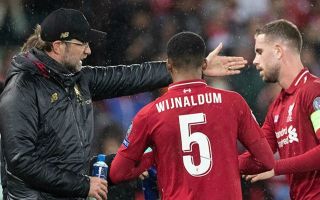 Liverpool midfielder Georginio Wijnaldum has said that he sometimes gets angry with manager Jurgen Klopp.

The Dutchman has been a regular for the Reds since joining them from Newcastle in 2016. So far, he has scored 13 goals and has provided 16 assists in 145 appearances across all competitions.

SEE MORE: Liverpool backed to win the Premier League by ESPN pundits because of one particular player

The Dutch international said that he has a love-hate relationship with Klopp while understanding that the german  As quoted by Express, Wijnaldum said: “With the manager it is more or less hate and love. I am sure Klopp has the best interests at heart with every player in the squad. But sometimes as a player, you are so intensely involved in a match and then the manager is still chasing you.

“Then you just boil over sometimes – and in my case, I do get angry with him. I still don’t know if what happened against Barcelona was his real plan. But that night I was so, so angry and so disappointed that he did not start me. Looking back, we can all say things worked out all right. We will never know how things would have gone if the manager had started me.”

This isn’t the first time Wijnaldum has expressed his anger at not starting against Barcelona in that historical match at Anfield. Speaking to BT Sport just after the match, the midfielder said: “I was really angry at the manager that he put me on the bench but I had to do something to help the team when I came on.”

The Dutchman came on as a second half substitute for Andy Robertson who injured himself during the match. He went on to score twice as Liverpool won 4-0 and qualified for the final.

The Reds have a number of quality players who are bound to be benched and there’s a good chance Wijnaldum might not start in all of the upcoming matches even if he’s fit.