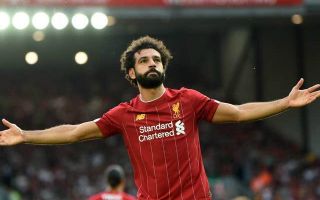 Liverpool legend Robbie Fowler has defended Reds talisman Mohamed Salah, saying that he has the makings of a great goalscorer.

During Liverpool’s match against  Burnley, Sadio Mane seemed frustrated at Salah for going for goal instead of passing the ball to him.

Ever since, many have called the Egyptian forward selfish with former Arsenal manager Arsene Wenger also stating that he is obsessed with finishing himself. As quoted by Goal.com, the Frenchman told beIN Sports:  I find him a just as good finisher but Messi is the complete thing – he gives the final ball as well and Salah is a bit obsessed now by finishing himself so that’s a dimension he’ll get certainly when he gets a little bit older. To find the moment when you have to give the ball and when you have to finish.”

However, Fowler thinks that what is perceived as selfishness, actually makes Salah a great goalscorer. In his column for the Mirror, the former striker wrote: “It’s the noise surrounding Mane and Salah that I can’t believe. Everyone commenting and talking nonsense about being “greedy” or destroying team spirit, have they never watched football before? Because you can’t be a ­top-class goalscorer without total belief you will score.

“That’s what goalscorers do. They train for it, their whole week on the ­training ground is spent practising, visualising, working out how to score for every position and the best always believe they can score – from five yards, from 20, from 40. Wherever. Even if it’s easier to pass for a tap-in. I look at Salah’s record and it tells me he’s going to keep doing it.

“You don’t score that many goals without being what people say is selfish. But what the hell do people want? Do they want him to be a goalscorer or do they want him to be someone who’s always looking to pass? You can’t really have both. And the other ­nonsense I’ve heard is people saying he’s not passing ­because he’s ­jealous, he doesn’t want Mane to score.

“If anyone can slow down the game so much they have time to think, ‘Oh, I’m not passing to him because he’s scored more than me’, well they’re the best who’s ever played. Yes, Salah can be ­selfish when he sees the goal, but, to me, that makes him a great goalscorer. And it’s not as if he doesn’t create chances for others. Mane knows that, and what he did was just frustration at being taken off.”

It’s a pretty fair assessment by Fowler here. In order to be a great striker, you’ve got to be what’s often cinsidered to be selfish. We have often seen the finest of scorers do the same thing. Sometimes, passing the ball often slows down the rhythm of the attack which could make it hard to finish. However, the strikers should also keep in mind the situation of the match and who is in a better position to score.

Nevertheless, there’s no doubt that things will be perfectly alright between Salah and Mane and we’ll see both players scoring a bucket-load of goals as the season progresses.