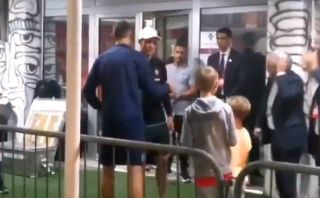 In what was then a pretty classy exchange from both players, Matic got Ronaldo to pose for a photo with his two kids, with the Juventus superstar all too happy to oblige.

Nemanja Matic waited outside Portugal's dressing room with his kids after yesterday’s game to take photos with Cristiano Ronaldo. Dream fulfilled for his children as they met their idol.

This just shows what an icon Cristiano is. Class.? pic.twitter.com/WMrhmrTo9t

It’s pretty sweet to see Matic go out of his way like that for his young sons, who despite having a Man Utd player for a dad, would obviously love to meet a bigger name like Ronaldo, like any other kid.

Ronaldo also showed he has time for his fans as well by giving Matic’s kids the perfect gift.