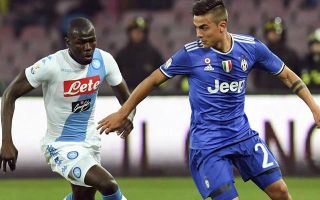 Manchester United reportedly have a chance of signing Paulo Dybala who is yet to start a game for Juventus this season.

The Argentine international has made 183 appearances for the Bianconeri since joining them from Palermo, scoring 78 goals and providing 30 assists. However, his performances haven’t been very good since last season.

Dybala is yet to make a start for Juve in 2019/20 with his only appearance coming against Napoli. With Gonzalo Higuain back in the Bianconeri’s plans, it seems highly unlikely that the Argentine will get much first-team football in Turin.

According to Manchester Evening News (via Calciomercato), Manchester United will make a move for Dybala come January. The Red Devils tried to sign the 25-year-old in the summer but his move fell through because of his high wage demands according to The Telegraph.

The report from Manchester Evening News also claims that Ole Gunnar Solskjaer is interested in a few more players which include Jadon Sancho, Christian Eriksen and Sergej Milinkovic-Savic.

There is a good chance that Dybala may have to spend most of this season on the bench. Hence, a move to Manchester United might hep him find first-team opportunities and reignite his career.