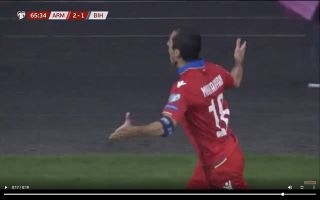 Some Arsenal fans couldn’t believe that star Henrikh Mkhitaryan, who was recently loaned out to Roma, turned in a phenomenal display for Armenia vs Bosnia.

The star scored two goals and provided two assists as he inspired his country to a 4-2 win.

Mkhitaryan was used in a central attacking midfield role, for the Gunners the Armenian has largely been used on the wings – a position where he fails to make this kind of impact.

The former Manchester United ace faced off against Gunners teammate Sead Kolasinac in the clash. Mkhitaryan certainly made sure that he came away with bragging rights.

Take a look at the star’s opener for his country below:

Armenia have taken the lead through the captain, Henrikh Mkhitaryan! ?

The star followed that up with a superb finish in the 66th minute:

We tried to warn you. Henrikh Mkhitaryan let loose from the shackles of Emery would tear any League apart. Mkhitaryan under Paulo Fonseca should be illegal. pic.twitter.com/jQ20swK0OY

The Arsenal loanee finishes off a wonderful move for Armenia as he slams it into the roof of the net! ?

The ace didn’t stop there as he added an assist in the 77th minute:

Mkhitaryan with the assist this time to put Armenia up 3-2 v Bosnia ?#ArmeniaBosnia pic.twitter.com/YU7pvLNZe0

Mkhitaryan could have come away from the game with a hat-trick, but his last-minute effort was turned into the net by Bosnia’s defender:

Mkhitaryan shot turned in by Loncar for Bosnia OG to make it 4-2 #ArmeniaBosnia pic.twitter.com/qRhP4v4wFu

Here’s some hilarious reaction to the star’s masterclass for his country:

Mkhitaryan having a better 90 mins for Armenia than 18 months at Arsenal. Wheres this guy been?

Henrikh Mkhitaryan scored twice & provided an assist today for Armenia. At this stage, it’s not even surprising anymore. What a player. I can’t believe we let him go. If I was Roma, I’d pay whatever it takes in order to secure his signature permanently. Right, guys? Right?

Mkhitaryan has scored a brace today for Armenia against Bosnia. Hope he can carry this form to Italy, we need him to have a good season with Roma.

Typical he’s dead while at Arsenal and deadly for everyone else ?

He is a really good player. He needs a team that can leverage that, especially as a number 10. Arsenal isn’t it, neither is the EPL.

Mkhitaryan is playing the game of his life. Can't string two passes together at Arsenal but scores two and assists one vs Bosnia.

Why couldn’t this mkhitaryan show up at arsenal ?.

Mkhitaryan with 2 goals and 2 assists for Armenia! Amazing what leaving Arsenal can do for a player.

Mkhitaryan brace and an assist just after he leaves Arsenal, can't make this up?

Mkhitaryan in BVB-mode for Armenia vs Bosnia and Herzegovina. Two goals and an assist. Been superb in this game. #AFC #FPL

Arsenal will be hoping that the 30-year-old attacking midfielder can carry this form into his loan spell with Roma, perhaps the Gunners can sell the ace to the Italian giants after a successful loan.

Alternatively, Mkhitaryan could return to north London and finally become the player that fans expected when he was brought to the Emirates in a swap deal involving Alexis Sanchez.