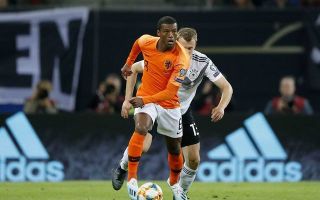 Liverpool midfielder Georginio Wijnaldum said that winning the Champions League has given his team the desire to win more titles.

Jurgen Klopp’s lads had a pretty terrific 18/19 season as they amassed a mammoth 97 points in the Premier League which, unfortunately, wasn’t enough to win the title. However, they won the Champions League by beating Tottenham Hotspur 2-0 in Madrid.

Wijnaldum feels that the triumph in Madrid has given his team the desire to win more and more titles. As quoted by the Mirror, the Dutch international said: “Winning the Champions League has given us all peace of mind. Now we know what it’s like to win the biggest trophy of them all – and we just want to keep going from here and add even more titles. But Jurgen Klopp is not putting ­extreme pressure on us to win the Premier League. He does not tell us, ‘Now you must win this or that trophy’. He is very ­relaxed.

“He did not do that ­during the past season, either. His idea is that we get the ­maximum out of every ­individual every single day that we are together. And then we will see where that brings us at the end of the season. Just look at the list of world-class players who have not won the ­Champions League during their careers. It contains more famous names than you would think – and it tells you that it is really special we have won it with Liverpool.”

The Reds have started this season strongly by winning all of their Premier League matches so far. They also clinched their 4th UEFA Super Cup by beating Chelsea in Istanbul.

This season, Liverpool have a very strong chance of winning the league title and provided the players maintain their good form and there aren’t any injuries, they could well lift it.

Following the international break, the Reds take on Newcastle United at Anfield before playing Napoli at the Stadio San Paolo.