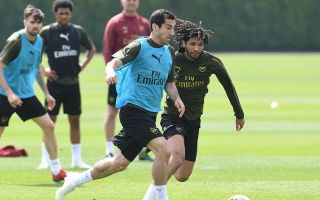 Armenian international Henrikh Mkhitaryan has said that he is not sure about his future with Arsenal.

The 30-year-old joined Serie A club AS Roma on loan following the North London Derby in which he appeared as a substitute.

Following Armenia’s Euro qualifier against Bosnia and Herzegovina in Yerevan, Mkhitaryan spoke about his future with the Gunners while speaking to VBET News. The former Borussia Dortmund star said: “Let’s first see what I can do at Roma. At the end of the season I think we can talk if I will have the possibility to stay or to go to something else, I don’t know.

Mkhitaryan joined Arsenal from Manchester United last January in a swap deal that saw Alexis Sanchez go the other way. The Armenian international has made 59 appearances for the Gunners, scoring 9 goals and providing 13 assists.

Mkhitaryan struggled to find consistency with Arsenal and will be hoping to have a better stint at Roma. He put on a pretty impressive performance for Armenia yesterday against Bosnia. The 30-year-old netted a brace as his nation beat the Dragons 4-2, registering their first win against them. Armenia are currently third in the group behind Italy and Finland.

Mkhitaryan will be hoping to make his Roma debut in their match against Sassuolo on Sunday.