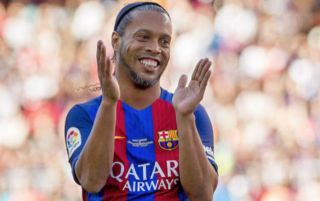 Ronaldinho has made the headlines in recent months for reported financial troubles, but reports claim he still enjoying life after hanging up his boots.

As noted by the Daily Mail, the Brazilian superstar has hit hard times after calling time on his playing career with claims of only having just over £5 in his bank accounts to troubles with both his partners and properties.

His money troubles are said to have led to his passport being confiscated with fines and court actions being brought against him as he continues to struggle while being blocked from selling his assets to raise funds.

Nevertheless, the report goes on to add that Ronaldinho remains positive and approaches life with that famous smile on his face as while he hasn’t followed the path that so many of his former teammates have gone down in terms of staying involved in football, he’s content with life in Brazil and living the life that he has always enjoyed.

The Mail note that he still lives in Rio de Janiero and loves to make the most of the beaches and weather that he can take advantage of in that part of the world.

Sponsorship deals will perhaps help him to continue to battle his problems while question marks will rightly be raised over the management of his money after such a glittering and lucrative career with some of the top clubs in Europe.

Nonetheless, it’s good to hear that Ronaldinho is still a positive individual looking to impart joy on others, and so it’s hoped that he can overcome his financial woes in the near future and put the negative reports behind him.