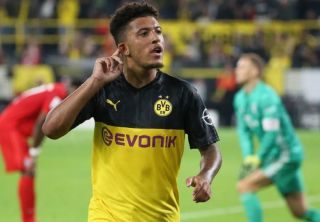 Jadon Sancho clearly wasn’t a happy man on Monday as the Borussia Dortmund star saw his FIFA 20 card and took exception with his passing rating.

The England international’s game has come on leaps and bounds over the last 12 months as he has flourished in the Bundesliga and emerged as a key figure for Dortmund.

After an impressive campaign last year, the 19-year-old now has 17 goals and 27 assists in just 60 appearances for the German giants, and he has continued to shine so far this season to show that it wasn’t just a fluke season last time round.

With that in mind, he would perhaps have been expecting his FIFA card to reflect that good form and be much improved from previous efforts.

However, as seen in his tweet below, he was left surprised and seemingly disappointed that they only gave him a 77 out of 100 for his passing, and with that being a strength of his to rack up all those assists, it probably is a little too low.

Sancho’s not happy, but he appeared to find the funny side of it rather than pull a genuine strop over it which was good to see…