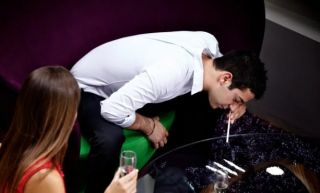 A big-name footballer at a northern club got himself out of trouble with his club despite taking cocaine – with a lawyer coming up with a story to explain the results of his drug tests.

This remarkable anecdote is shared by the so-called Secret WAG in her column in the Sun, who claim she is a genuine partner of a Premier League footballer who himself doesn’t know she’s writing the column.

MORE: Married Premier League star having repeated affairs as women show up on his doorstep

This player’s lawyer clearly worked wonders with this bizarre explanation, which we can’t really believe the club in question fell for!

‘Everybody knows that footballers love women, shopping and football. But when it comes to drugs, most fans think they’re squeaky clean because they get tested.

‘Wrong! That just isn’t the case at all. What actually happens is they carefully choose when to take drugs and when not to.

‘Most “sensible” players do their partying in the summer — and that includes a lot of cocaine.

‘They stop taking drugs just before the next season so it can’t be picked up in drug tests. Or that is generally the plan.

‘But I’ve known footballers go into a blind panic before pre-season when there is a risk that they could undergo a random test.

‘There was one — very well known — player, at a northern club, who was caught with cocaine so he asked his lawyer for advice.

‘I don’t know who came up with his cover story — but it was brilliant.

‘They said the drugs were in his system because he had been out partying with a group of girls and they had all been using the same pot of Snus — those tobacco balls that Ashley Cole and Jamie Vardy have been photographed using — and one of the girls he’d been partying with shared the Snus and dipped her fingers into it.

‘They argued that the girl must have had cocaine on her fingers and it got into his system. (This player wasn’t Ashley or Jamie, by the way).

‘He told all his mates so they could back him up too.

‘Money buys the best legal brains in the business but they’re not all squeaky-clean so the players turn to them when they are in all kinds of scrapes. And generally they will help them get out of trouble!’