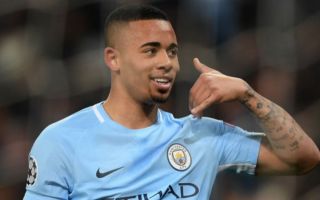 Despite the riches and fame that come with playing for Man City and Brazil, Gabriel Jesus is reportedly still at risk of getting an earful from his mum.

While spending time in Brazil during the international break, the striker has posted an image on Instagram alongside a stunning female companion who appears to be his better half.

Ludmilla Oliveira da Silva has been identified as the woman in question, and it appears as though the pair have decided that it’s the right time to go public with their love for one another.

However, according to The Sun he risks being in his mum’s bad books if he has been enjoying himself a little too much while back home, as she awaits his return in England having moved over with him after his switch to join the reigning Premier League champions.

It’s suggested that she doesn’t approve of snogging and other frolics having set clear rules and morals in her children after raising them alone, and so by being so blatant with his Instagram post, Jesus may well have some questions to answer when he gets back to Manchester with his protective mother enquiring over exactly what he’s been up to while away…