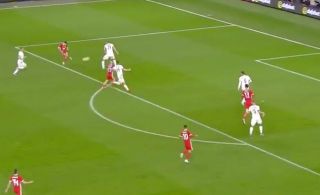 Man Utd fans will have been delighted to see Daniel James on the scoresheet for Wales on Monday night, as he scored in some style too.

The 21-year-old has been a revelation so far this season following his summer switch from Swansea City, bagging three goals in just four Premier League games.

Ole Gunnar Solskjaer has shown his faith in him and that has been repaid thus far, and it appears as though James’ confidence is sky high as he produced real quality for Wales too.

As seen in the video below, the youngster cut in from the left on to his favoured right foot, and after creating a bit of space for himself, he sent a superb effort curling into the back of the net to break the deadlock after 16 minutes.

It was another fantastic finish as his goals for United have been classy too, and Solskjaer will certainly be delighted to see his young star continue his impressive start to the campaign and will hope that he can return to Old Trafford later this week ready to recreate this type of quality on a consistent basis.

How about this for a finish from Daniel James! ?