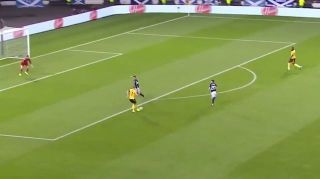 Romelu Lukaku was on the mark for Belgium yet again on Monday night as he broke the deadlock in their clash with Scotland.

The 26-year-old has enjoyed a positive start to life with Inter this season after scoring two goals in his first two Serie A outings, and it appears as though he’s taken that form on to the international stage.

As seen in the video below, Belgium caught the hosts out with a quick counter-attack led by Manchester City star Kevin de Bruyne, who not only found space in the final third to create the opportunity but then produced a perfect pass into the path of Lukaku to finish.

It was a wonderfully composed finish from the former Manchester United striker too, as he took it in his stride and side-footed it into the back of the net to open the scoring on the night.

As noted below, he is enjoying an incredible run of form for his country, having bagged 26 goals in his last 22 international appearances, as he’s now just one more away from reaching 50 goals which would be a special landmark to hit for him.

A quick breakaway results in a simple goal for Lukaku!

?? ?? Romelu Lukaku
Goal 49 for his country
26 goals in last 22 internationals
Scored in last 5 competitive internationals
4 goals v Scotland, more than against any other nation pic.twitter.com/NcYyKMqF4n

That's all it took from a Nacer Chadli defensive header to Romelu Lukaku slotting home at the other end. #SCOBEL #EURO2020 #OptusSport pic.twitter.com/ZbzknhNQUG

Lukaku could have done lunges to pick that ball up pic.twitter.com/fbexmaruUw

Liverpool star is the only player who can stop in-form Euro 2020 ace, says Rio Ferdinand