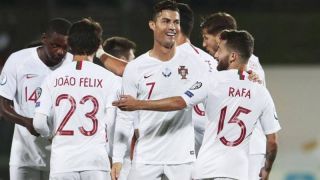 Cristiano Ronaldo needed to put in a top performance for Portugal in their crucial clash with Lithuania on Tuesday night, and he certainly didn’t disappoint.

Ukraine boast a comfortable lead in Group B of Euro 2020 qualifying, as they sat eight points clear at the top of the table before kick-off in Lithuania.

With that in mind, Portugal couldn’t afford to drop points if they have ambitions of finishing top of the standings, and so they needed to produce this week.

Fortunately for them Ronaldo was in clinical form as he bagged four goals, albeit one of his efforts took a blunder from the Lithuania goalkeeper to find the back of the net.

Nevertheless, as noted by Calciomercato, the 34-year-old ended up with four goals on the night, and that in turn helped him break yet another record in a glittering career thus far.

Ronaldo took his goalscoring tally in European qualifiers up to 25, and that in turn allowed him to surpass Robbie Keane who had previously held the record with 23.

In turn, that’s another record with Ronaldo’s name attached to it, as he continues to produce for club and country despite being in the latter stages of his career.

Portugal will hope that he can continue to deliver to help them secure qualification, and after winning Euro 2016, they’ll hope that they can successfully defend their crown and enjoy further success with their talisman leading the charge.